In any other year, we would just have finished the opening slate of the Top 16 round stage of the Euroleague. This year, however, it’s just another week in the new, longer slog of the Euroleague campaign.

Let’s take a look at some things that happened in Round 11. 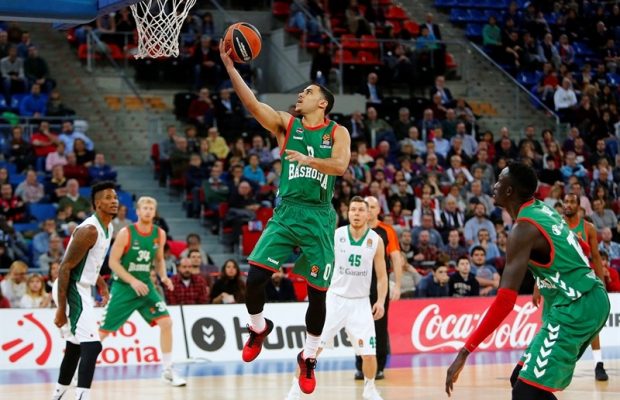 Can Baskonia return to the Final Four?

Baskonia went from Euroleague dark horse to the Final Four a year ago in 2015-2016. However, it was safe to say most people weren’t expecting the same from the Basque club in 2016-2017. Of course, one could justify the thinking. They not only lost head coach Velimir Perasovic in the off-season to Anadolu Efes, but they also lost Euroleague MVP-runner up Ioannis Bourousis and Mike James to Euroleague competitor Panathinaikos; Darius Adams to China, and Davis Bertans to the San Antonio Spurs. Add that with uninspiring free agent signings such as Andrea Bargnani (coming off a miserable season with the Brooklyn Nets), Shane Larkin (a good, but not great NBA point guard), and Johannes Voigtmann (who played for the Fraport Skyliners; a FIBA Europe Cup participant a year ago), and it was expected to be a growing, perhaps rebuilding season in Vitoria-Gasteiz under new head coach Sito Alonso, who has only coached a total of 10 games in the Euroleague with DKV Joventut in 2008-2009.

Despite the modest projections, Baskonia has not only proven to be better than expected, but they may be even better than last year’s 4th place squad. Bargnani’s health going forward this season is a question, as he has only played 7 games this year, but he has been productive when on the floor, as evidenced by his 12.6 ppg, and 10.9 PIR. The biggest impact though has come from Larkin and their post players, where the Basque club has demonstrated considerable diversity in their depth chart. Larkin, a former Nets draft pick out of the University of Miami, has thrived in the Euroleague (not an easy feat considering the amount of Ameircan duds this season; more on that later). He’s averaging 13.5 ppg, 6.4 apg, and a PIR of 15.8, which is the second best mark on the squad. Though Adams and James certainly added a 1-2 punch from the point guard position, neither of them have the pick and roll passing ability and deftness in the half court offense that Larkin has demonstrated this year. What could make Larkin even more dangerous this year is the addition of Pablo Prigioni, a former Baskonia star returning to Europe from a stint in the NBA, who could provide excellent mentoring to Larkin, not to mention backup on nights when the first-year star is not on his A-game.

Of course, Larkin wouldn’t be as successful if he didn’t have quality posts to work with, and Larkin and head coach Alonso have been able to utilize their multiple talented block players to maximum effectiveness this off-season. Bargnani earned a lot of publicity in the pre-season due to his status as a former No. 1 NBA Draft pick, but it’s the other supporting bigs who have done most of the damage for Baskonia. Voigtmann has been a double-double efficiency machine, as evidenced by his 12.1 ppg, 7.5 rpg and team-leading 17.6 PIR. Tornike Shengalia, who was hobbled by injury a season ago, has been solid averaging 10.1 ppg and 4 rpg. And Kim Tillie has been a dependable big off the bench, as evidenced by his 4.4 ppg and 50 percent shooting from beyond the arc. Lastly, bring in Chase Budinger, who can bring some stretch-4 options into the mix, and it’s no surprise that the frontcourt has been the strongest aspect of Baskonia’s arsenal (along with Adam Hanga’s incredible defensive ability; he probably is the best perimeter defender in Europe).

One of the most interesting progressions this season though may be Ilimane Diop, who saw some time as a spot starter when Shengalia was injured a year ago. Diop doesn’t average much time (as he averages only 8.8 MPG), and he still is work in progress offensively, but he has appeared in every game this year, and has proven to be Baskonia’s most valuable post defender this season. According to Overbasket.com, teams are shooting only 34.6 percent from the floor when Diop is playing in comparison to 43.7 when he is off. That 9.1 percent difference is the largest positive difference for any post player on this Baskonia roster. It’ll be interesting to see if Alonso will utilize him more down the stretch, especially against teams that struggle to score in the half court.

If you compare the performance and shooting numbers of this year’s Baskonia squad to the one a year ago, it’s quite remarkable how similar the teams are statistically speaking. For the most part, they are the same efficiency-wise on both ends of the court with some minor differences: this year’s squad scores more in the post, and rebounds better; last year’s squad shot better from three and played at a bit faster pace. Considering the inconsistency we have seen from a majority of the Euroleague squads this year (especially in the 5-16 region), the fact that Baskonia looks to be as strong as last year’s squad on paper and in the record book (they’re 7-4 and tied for fourth) is definitely an encouraging sign for Baskonia fans that they will be able to make it back to the Final Four, only this time they will be purchasing a ticket to Istanbul rather than Berlin.

After a big win in Piraeus over Olympiacos, things looked pretty bright for Maccabi Fox Tel Aviv. They were 5-4, in sound playoff shape, and looked to be really gelling under new head coach Rami Hadar (who took over for Erez Edelstein after an 0-2 start in Euroleague play). Furthermore, they were going into a three-game stretch which had 3-0 possibilities, with home contests against Efes and Brose and a road game against Crvena Zvezda, who had been fading as of late (though playing in Belgrade is always a difficult task due to their rabid fans).

However, it appears that Maccabi will be lucky to avoid an 0-3 stretch after Round 12. They were out-muscled and hustled against Efes in a 86-77 loss, as the Turkish club out-rebounded Maccabi 36-30 and had less turnovers (13 to Maccabi’s 21) as well. The following week, Maccabi came out flat and never recovered, as they put up an atrocious defensive performance in a 85-70 loss where Maccabi never led at any point in the game. Brose shot 54 percent from the field, including 48.1 percent from beyond the arc. Considering that 45.9 percent of Brose’s points came from beyond the arc, it makes sense that game was so lopsided, especially in the points per field goal mark (1.29 to Maccabi’s 0.86).

Now 5-6, and traveling to a tough venue in Belgrade, Maccabi is scrambling to find an identity and the right kind of leadership to help them get back on track. The talent is certainly there, and if Quincy Miller was healthy, you can understand why Maccabi fans were so excited about this team after such a disaster of a Euroleague and Winner League season a year ago. That being said, as kind of talked about by a lot of English-speaking Euroleague experts on Twitter, this team doesn’t seem to fit together with so many players possessing “similar” playing styles (i.e. “high-usage rate guards”).

New signings Andrew Goudelock and Sonny Weems need the ball to be successful and productive, and add that with a similar kind of player in Devin Smith, and it is no surprise that the offense stagnates into constant isolation and 1-on-1 plays. To make matters worse, Maccabi is thin in the post, with Colton Iverson and Maik Zirbes the only two giving any production around the rim, and they lack a true play maker who can create for others. Gal Mekel, expected to the be in the starting lineup, has been glued to the bench lately, and Yogev Ohayon, is a jolt of energy off the bench, but is not the kind of point guard to handle such a diversity of talents. And to make matters worse, though this team may be the fastest in Europe, especially with the combination DJ Seeley and Victor Rudd on the wings, they seem to take plays off, which was evident against a much more motivated and better prepared Brose team last week. They don’t fight through pick and rolls. They don’t contest shots consistently. And they don’t get on the boards like they need to at times, resulting in too many easy second-chance points.

Goudelock, Weems and Smith are talented scorers on their own, and on a squad bereft of talent, they shine as players. But on the same roster and sometimes on the same floor? Well, the offense stagnates, one of them ends up standing around totally disengaged from the offense and sometimes defense, and it has hurt Maccabi time and time again this year in terms of building chemistry and consistency. If Maccabi really wants to make the playoffs and be a serious contender for a Final Four spot, a change in the ROSTER and not the coaching needs to happen. It’s got to be Goudelock’s team. Or Weems’ team. Or Smith’s team. All three can’t co-exist. Yes they’ll have spurts like against Fenerbahce and Olympiacos, but more often than not, we’ll see duds like the ones against Efes and Brose due to the flaws of those three players working against each other and consequently, the team as a whole.

CSKA Moscow was challenged early in Milan against Olimpia Milano, but their talent and depth took over as they won 79-64 to keep the top spot in the Euroleague standings at 10-1. However, with de Colo still out, and do-it-all guard Milos Teodosic citing fatigue issues, their top spot may be challenged real soon by Real Madrid.

Madrid won by a much slimmer margin against Zalgiris Kaunas 96-91. However, this is Zalgiris team that is gelling under head coach Sarunas Jasikevicius, and may be a move away from being a darkhorse playoff contender come March. The fact that Real took their best shot, and still came away with the victory is no easy feat, especially considering they also play in the Liga Endesa, the top domestic competition in Europe.

One of the big reasons to feel confident in “Los Blancos” is their depth, as they go 10-12 deep rotation wise, important considering the longer Euroleague campaign. New acquisition Anthony Randolph has been a two-way beast who complements established Madrid stars Felipe Reyes and Gustavo Ayon well. Furthermore, Dontaye Draper has been a nice backup guard who gives Madrid defensive stability when star Sergio Llull is on the bench.

However, the biggest revelation has been 17-year-old Luka Doncic, who scored 17 points, and had 4 rebounds and 4 assists and a PIR of 24 in their win over Zalgiris. Many expected Doncic to still be a year away from being a true impact player, but it’s already obvious that if Madrid wants to win the Euroleague, Doncic’s performance down the stretch will be crucial. He’s not eligible until the 2018 NBA Draft, but it’s safe to say that if he keeps this rapid progression, he should be a lock for the No. 1 spot.

Starting planning for next year…

I hate to be saying teams should be thinking about 2017-2018 so early in the season, especially with limited licenses on the line. However, I think it’s safe to say we can eliminate the following teams from playoff contention: